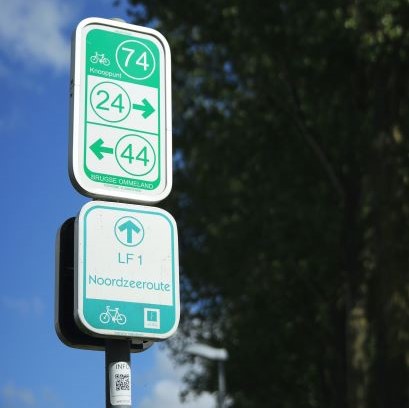 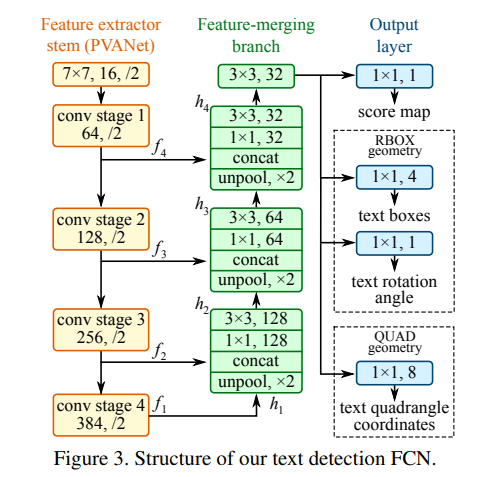 The model is a fully-convolutional neural network adapted for text detection that outputs dense per-pixel pre-dictions of words or text lines. This eliminates intermediate steps such as candidate proposal, text region formation and word partition. The post-processing steps only include thresholding and NMS on predicted geometric shapes. The detector is named as EAST, since it is an Efficient and Accuracy Scene Text detection pipeline.

Authors have experimented with two geometry shapes for text regions, rotated box (RBOX) and quadrangle (QUAD),and designed different loss functions for each geometry. Thresholding is then applied to each predicted region, where the geometries whose scores are over the predefined threshold is considered valid and saved for later non-maximum-suppression. Results after NMS are considered the final output of the pipeline.

Recap of Some basics

It is essential to recap Pooling and Unpooling before we jump into network architecture.

Unpooling layer
During the pooling operation, create a matrix which record the location of the maximum value, unpool operation will insert the pooled value in the original place, with the remaining elements being set to zero. Unpooling captures example-specific structures by tracing the original locations with strong activations back to image space. As a result, it effectively reconstructs the detailed structure. 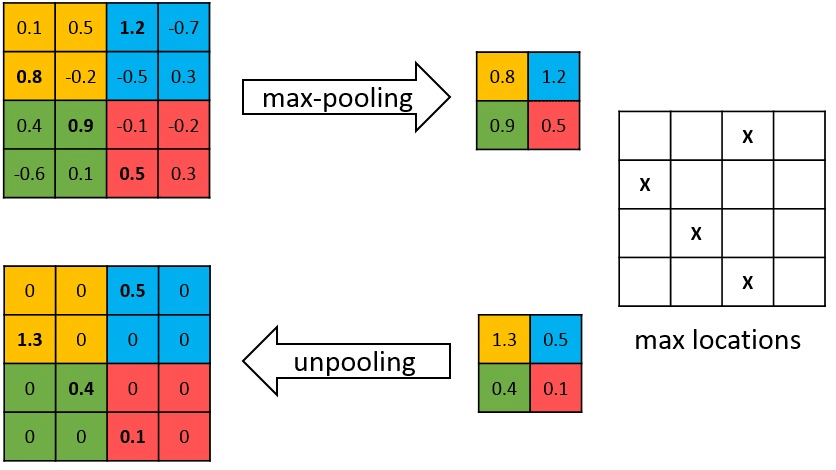 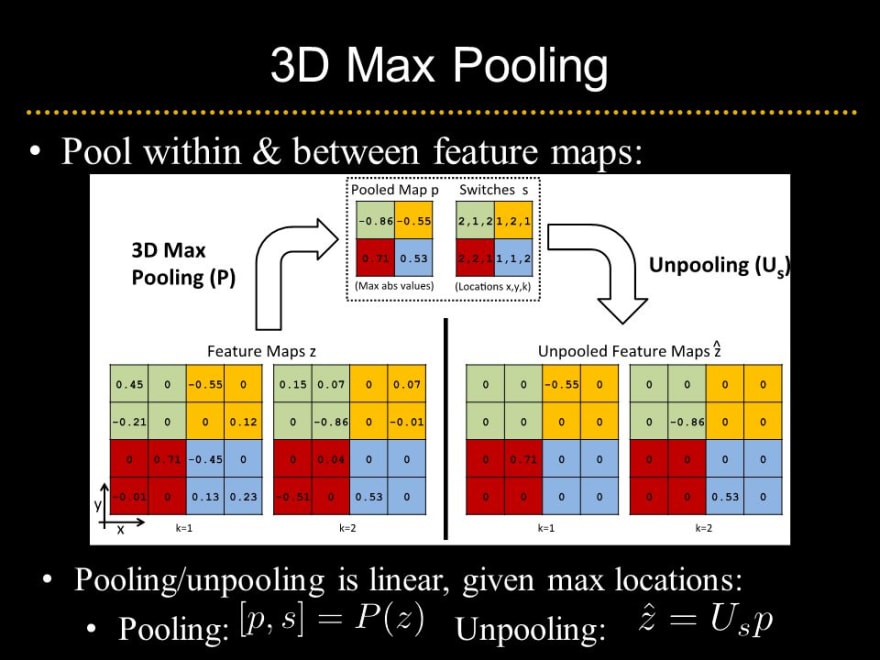 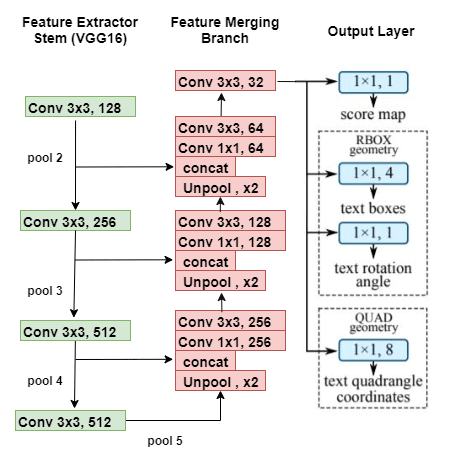 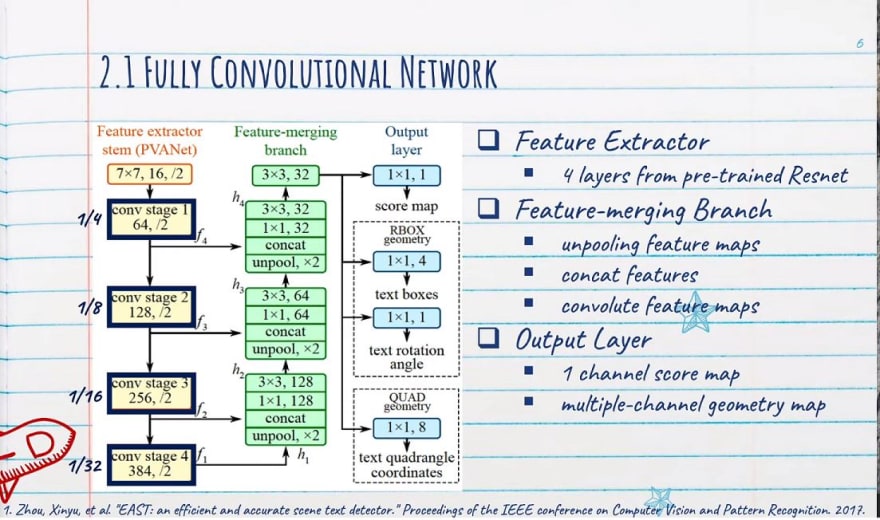 In this branch of the EAST network, it merges the feature outputs from a different layer of the VGG16 network. The input image is passed through the VGG16 model and outputs from different four layers of VGG16 are taken. Merging these feature maps will be computationally expensive. That’s why EAST uses a U-net architecture to merge feature maps gradually (see EAST architecture figure). Firstly, outputs after the pool5 layer are upsampled using a deconvolutional layer. Now the size of features after this layer would be equal to outputs from the pool4 layer and both are then merged into one layer. Then Conv 1×1 and Conv 3×3 are applied to fuse the information and produce the output of this merging stage.

For the stem of architecture, it takes the output from the VGG16 model after pool2, pool3, pool4, and pool5 layers.

Feature merging architecture is repeating one and it has concatenated two set of feature after previous one have gone through Unpooling. Conv 1×1 has been used here to reduce number of channel and then it has gone through Conv 3×3. The paper states:

Following the last merging stage, a conv3×3 layer produces the final feature map of the merging branch and feed it to the output layer. 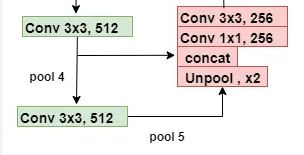 The final output layer contains several conv1×1operations to project 32 channels of feature maps into 1 channel of score maps and a multi-channel geometry map. The geometry output can be either one of RBOX or QUAD.

Thresholding and MMS being used to merge bounding boxes. 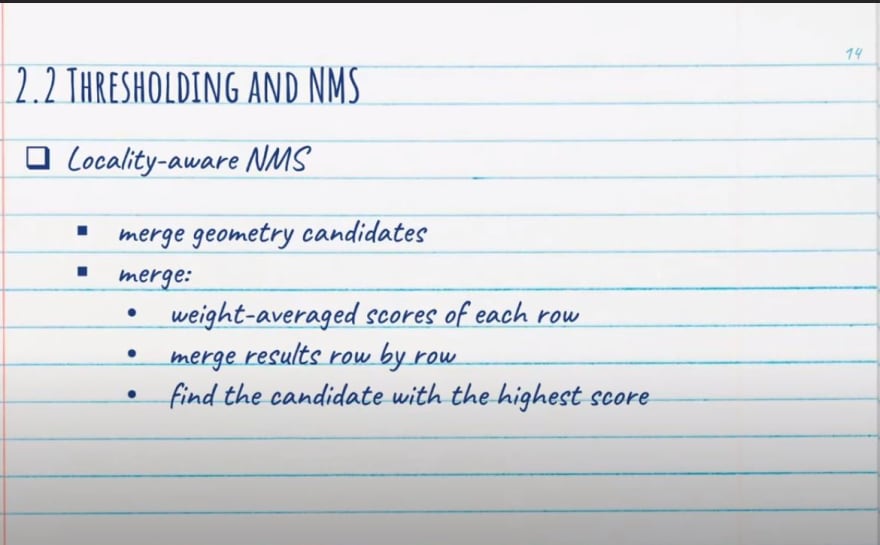 The loss function of such network will have two component. First component is due to Prediction for object presence and 2nd one is due to co-ordinates of the bounding boxes. 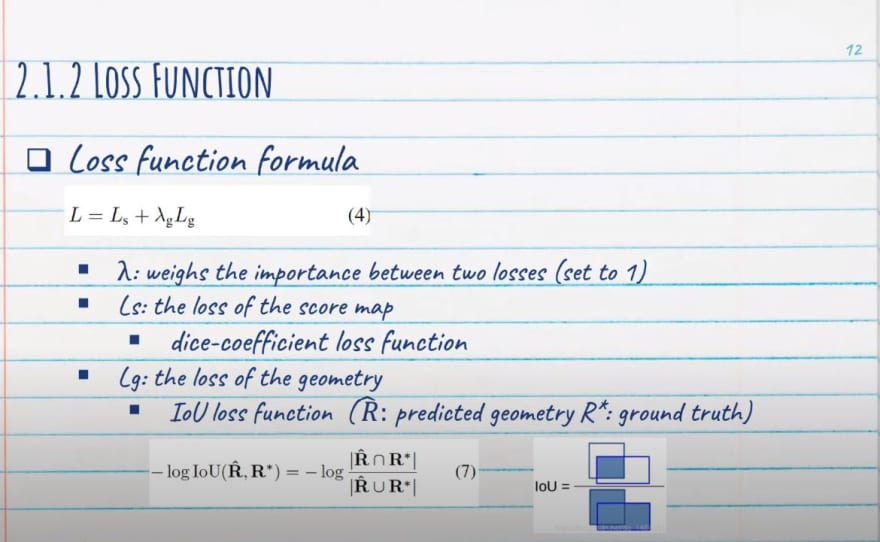 Different from the common target detection network to deal with sample imbalance, such as equalization sampling, OHEM and so on. EAST algorithm is adopted Class balanced cross entropy to solve the problem of category imbalance.

where β weighting is used, the weight is determined by the ratio of positive and negative cases, and the smaller the ratio, the larger the weight. But in the actual combat, generally adopted dice loss because its convergence speed will be faster than the class balance cross entropy. 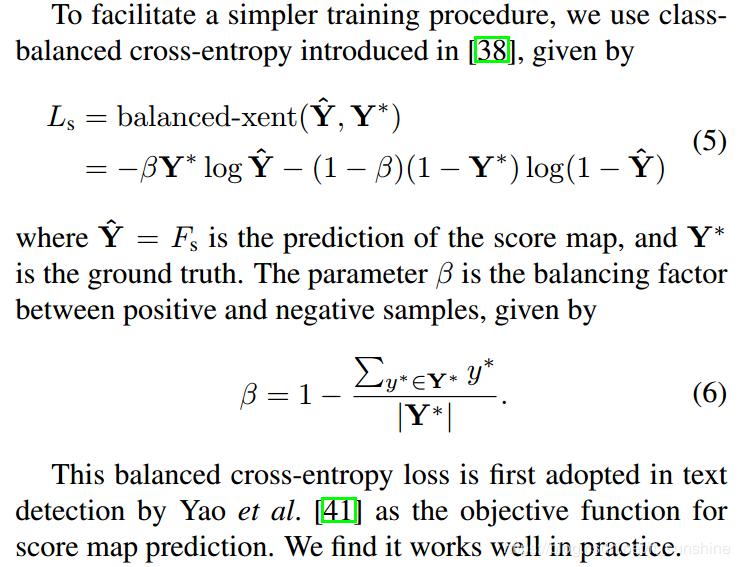 The paper says “Directly using L1 or L2 loss for regression would guide the loss bias towards larger and longer text regions”. So they found that, in order to generate accurate text geometry prediction for both large and small text regions, the regression loss should be scale-invariant. Therefore authors have adopted the IoU loss in the AABB part of RBOX regression, and a scale-normalized smoothed-L1 loss for QUAD regression.

RBOX also has an angle, here uses the cosine loss:

The hats in the above formula all indicate predictions, and “*” means GT. and so:

Whereλθ is set to10 in authors experiments.

Predicted geometries after fully convolutional network are passed through a threshold value. After this thresholding, remaining geometries are suppressed using a locality aware NMS. A Naive NMS runs in O(n2) where n is the number of candidate geometries, which is unacceptable as we are facing tens of thousands of geometries from dense predictions. But to run this in O(n), authors adopted a method which uses suppression row by row. This row by row suppression also takes into account iteratively merging of the last merged one. This makes this algorithm fast in most of the cases but the worst time complexity is still O(n2).

Based on Hypothesis: Candidate boxes based on adjacent pixels are highly correlated. Therefore, these candidate boxes can be merged step by step, and then the conventional NMS.

The network is trained end-to-end using ADAM optimizer. To speed up learning, they have uniformly sampled 512×512 crops from images to form a minibatch of size 24.

The maximal size of text instances the detector can handle is proportional to the receptive field of the network. This limits the capability of the network to predict even longer text regions like text lines running across the images. Also, the algorithm might miss or give imprecise pre-dictions for vertical text instances as they take only a small portion of text regions in the ICDAR 2015 training set.